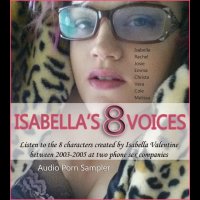 OFFICIAL SYNOPSIS
Audio porn star Isabella Valentine has been a professional phone sex operator since 2003. Between 2003-2005, Isabella worked for two phone sex companies (and co-owned one), and during that time played multiple characters. During those years, Isabella played eight girls total , with a maximum of 5 at each company at any time. The first girl was Isabella, then Rachel, Josie, Emma, Christa, Vera, Cole, and Melissa. Each girl had her own personality, opinions, birthday, and set of pictures all licensed by the companies who photographed the original model. It wasn't until 2006 that Isabella came out using photos of herself in the public.

This mp3 will only be available for a limited time in my store and then it will be available free exclusively for members at WithLoveIsabella.com.